Evenings at Om beach in Gokarna are magical. The unique rock formations close to the shore make it possible for humans to venture out far away from the land. I made this image on our recent Landscape Photography workshop to Gokarna. I co-mentored the workshop with another landscape photographer, Dinesh Maneer.

I shot exclusively with my Fujifilm XE-2 mirrorless camera in Gokarna. In this photo, I used a Rokinon 12mm f/2.0 NCS CS lens. This combination produced spectacular results and I can safely recommend it to any landscape photographer. Sure, it does not have the density of pixels like that in the 5D Mark III. But as you can see in this photo, the Fuji can produce extremely pleasing tones, not to mention sharpness.

One aspect of shooting landscapes by the ocean is the unpredictability of the waves. My original intention was  to capture both the star burst of the sun, and the crashing of the waves in a single photo. Unfortunately, the ocean did not co-operate with me, and I couldn’t fulfill my vision. Another participant on the tour was better prepared and shot a similar frame with the crashing wave. Interestingly, both of us were using mirrorless cameras.

With no clouds in the sky, and the sun still a little high up, there wasn’t anything interesting above the horizon. This prompted me to convert the photo to monochrome, and bring emphasis to the patterns in the wave, and the star burst. I am aware that the Rokinon lens has barrel distortion, but hey, the earth is round 🙂 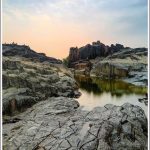