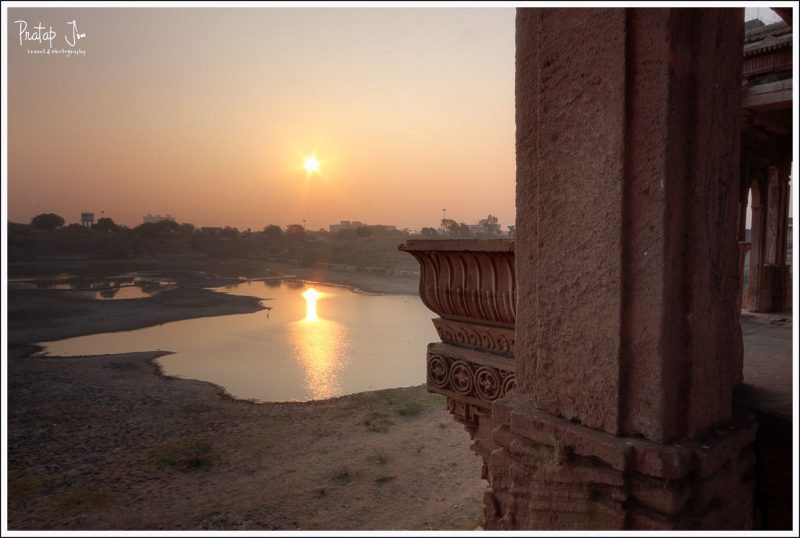 The next morning, Uday and I borrowed a friend’s bike to go to a place named Sarkhej Roza. It has the ruins of an old monument and a mosque. Sadly the place was quite dirty. The mosque portion of the area was still functional, but the rest of the ruins were in a state of total neglect. By the time we got there, the sun was well above the horizon. Scouting around took time, and I couldn’t capture too many frames. The Islamic style architecture was quite eye catching, and in spite of spotting good photo-ops, I didn’t do justice to the tripod and gear I was carrying. I only managed a couple of frames of the Queen’s palace. Nevertheless, I had chance to see some rustic side lanes of suburban Gujarat. We got back to the room from Sarkhej Roza and got dressed to go to the tourist department. The plan was to gather information about our upcoming road trip.

We were early at the Gujarat Tourist Department office, so we killed time loitering around. By the time the tourist center opened, we had already made phone calls to gather information about the Rann of Kutch region. At the Tourist office we bought a map of Gujarat, and I picked up some information brochures. Sadly, our Tourist Department offices almost everywhere never reflect the hospitality India is famous for.

From the Tourist office, I headed towards the bus stop to catch a bus to Adalaj, while Uday went back to NID. It was 10 am, but I decided to carry my tripod along with me for no logical reason. It did help me later on, but standing there at the bus stop with my camera messenger bag on one shoulder and the tripod on another, I had the word T-O-U-R-I-S-T written all over. Surprisingly this didn’t change anything about anyone around me. They just went on with their life. This aspect of Gujarat impressed me a lot.
Adalaj is a village around 20 km from Gujarat, and is home to the famous five-stored step-well (vav). The Indo-Islamic architectural style is a visual treat, while the step-well is an architectural marvel. Since I was on my own, with no definite agenda for the rest of the day, I took my own time at the vav. It was definitely much cooler five stories down, and there was no security guard to prevent me from shooting with my tripod. Since it was dark inside, the tripod did help after all. Tourists came and went in small and large numbers, but I hung around until I could no longer take the damp air. I had easily spent a couple of hours, after which I caught a bus back to Ahmedabad. I traveled by a local bus again. This way, I was getting to know from the grassroots.
Once back in the city, I walked the streets near Paldi to look for a place to have lunch. I learnt that there was an auto strike so after lunch I just caught the first auto that was willing to ferry me back to the room. I dumped my stuff in the room and took a nap. Needless to say, I was tired so I spent the rest of the day hanging around at NID. My friend was busy completing his movie (or was he working on his guide’s wife’s movie), so I was pretty much on my own. The next day too, I spent just relaxing and getting to know people around the campus. It was fun, and I was getting to feel younger hanging around with the student types. 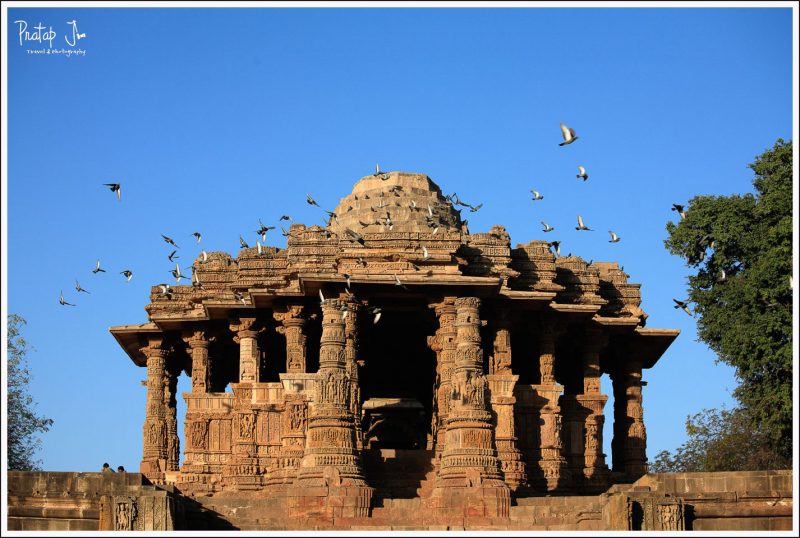 Roadtrippin’ on the Little Rann

The morning of Christmas saw Uday, his roommate, a friend and myself get ready by 4 am to leave for a planned road trip to Modhera and nearby places. We were to pick up two other folks, and we wanted to be at the Sun temple by sunrise. Four am was an unholy time to start the day, but we were in good spirits. A Tata Sumo was to pick us up but dude to some miscommunication between the driver and us, he (apparently) waited near the hostel till 6, we waited in our room till 6 – each of the parties thinking the other is late.
There was no use starting the day with heated arguments, so we didn’t make a big issue over the delay. Road trips make angels of us all, I guess. Uday, three of his NID friends and I were zooming on Gujarat’s well-maintained highway towards our destination, talking and getting to know one another better. We were at Modhera just in time – the sun was painting the stone structure in brilliant light. And it was bloody cold! Experience has taught me that the golden hour never really lasts for 60 minutes so I was filling up my CF cards rapidly. There weren’t too many tourists at that time either, so I could shoot without distraction. The challenges of getting creative under these constraints helps you evaluate where you stand as a photog.
Once the busloads of tourists started arriving, we scooted back to the Sumo. But we weren’t really sure where to go next. Out came the map – and suggestions and opinions. We decided to give Patan a miss and head to the Little Rann of Kutch instead. Who knew it would be an experience of a lifetime?

Well before that, we had to feed ourselves. We stopped at the next village for some authentic Gujarati breakfast – and oh boy, did it freak me out or what. Folks out there seemed to eat only deep fried high calorie fart producing savories for breakfast. No good old idli, dosa.. The namkeens were tasty alright, but this wasn’t the kind of challenge I wanted to throw at my tummy while on a road trip…especially when heading to a dessert.

After break fast, we kept driving until we hit a village that seemed to be at the edge of civilization. We continued on the road that slowly dwindled to become an untarred clay path, and were soon in what was officially the Little Rann of Kutch. My urban mind had never seen such openness. All around, for miles and miles, there was nothing but earth (broken for want of water), the open sky (bluer than ever), a few scrubs (to remind us we were still on this planet) and us (stunned and uttering expletives and exclamations at a regular frequency). I was getting high on just the vastness of the place. I am sure this experience was equally spiritual for every one of us, including our driver who had never been to this part of his own State. What were we to do? Keep driving on a path marked by stones on either sides, or turn back? Occasionally we did see a villager pass by in a two-wheeler pass, so that gave us courage. We decided to explore more, but not by sitting inside the vehicle. A flat tire in this middle of nowhere forced us all to get off, but the driver fixed the spare in no time. Everyone decided to sit on top of the Sumo, while I decided to take the wheel! We kept driving this way until we saw something that looked like a salt lake at a distance. There was a huge mound of earth and a little hut. We parked and walked towards this strange set up to investigate. Who would be living in this god-forsaken desert? Is this one of the salt industries we had heard of? It was indeed a one-man salt factory. Imagine, one man living all by himself in such an inhospitable terrain! This very thought blew the heck out of us.

We tried to converse with this desert hermit. He showed us the salt lake, his hut, the sprouts he was growing. He told us he gets supplies from the nearby village once in two weeks or so. For the rest of the time he stays alone and looks after the salt lake. He was super friendly in spite of the language barrier. He seemed to be speaking a local dialect, which only our driver understood. After speaking and getting a sketchy idea of the purpose of his life, we gave him the fruits we were carrying for the trip as a gift, and bid him goodbye. So were already two mind-blowing experiences down. The third came after lunch. Yes, lunch! Our path led us to a mud walled temple cum rest house that served us free food! Who would have expected to find lunch in the desert? But we did, and had enough to satisfy our hunger. The temple seemed to be popular considering its location. There were a bunch of families that had driven down on a pilgrimage. We learnt that the Great Wild Ass sanctuary was a few kilometers ahead, but our driver was hesitant to take us there. We had used up the spare tire and another flat would have put us in a risky position. Instead we decided to go to a nearby lake. We were told it had migratory flamingoes. So we drove away from this oasis in search of the lake. That was when we understood how easy it was to get lost in this place, and why there were stones to mark the ‘road’.

After a few kilometers, at a great distance we saw a cloud of pink – flamingos in flight! Another spectacular sight that was instantly imprinted in my head. The soil was getting marshier as we neared the lake, so we parked and decided to walk towards the birds. We were in for a surprise when we reached the lake – the birds were actually on the opposite bank.  And oh, btw, Uday’s friend was filming the whole Rann experience in true NID style. I was shooting away to my heart’s content too. The whole experience would have been complete if had a chance to spend one night in that place, but we had to get back to Ahmedabad. The trip was planned only for a day, and Uday and I had to travel to Bhuj that night. It was around 3 pm and we had to be return to Ahmedabad by 8 pm to catch our bus. The return journey was rather uneventful, but we sure had a very interesting day.