Bhuj – a bounty of beauty

At Bhuj, Uday and I checked into Hotel Gangarams. I had heard good things about this hotel based on the online research I had done before the trip. So I had called and booked a room the day before. The hotel was quite unconventional. The owner was a friendly old man who had a lot to say about Bhuj. There were only 3 boys helping around – and the actual hotel complex was quite huge, accommodating monthly boarders and other long staying tenants as well. Our room was small and adequate, with a geyser and television. Our initial plan was to stay in Bhuj for two days, and then explore Daman and Diu. However, we didn’t have any travel options to reach Daman or Diu directly from Bhuj, so we ended up extending our stay by a day. Bhuj had so much to offer and then some.

Based on our hotel owner’s suggestion, we decided to visit the Bhuj Crafts village on day one. Before that, we had to register at the local police station and get permits to travel around the region. Being very close to our troublesome neighbouring country, it was mandatory for all outsiders to get permits from the local police station. It didn’t take time, and seemed to be routine stuff for the cops. One cop advised me not to use a telephoto or a wide-angle lens. He said long distance photography could land me in trouble. I just nodded. Who was I to argue with the authorities?

The Rann of Kutch region was popular for numerous arts and crafts unique to the small villages in that region. The crafts village was an attempt to bring villagers under one roof and give them a chance to sell their craft. We took a local bus to that place – and spent a little money shopping. The people of the village were very welcoming. One shop owner showed us his backyard that he had converted into a handloom mill. He spoke to us about how the earthquake in 1991 had flattened every structure to the ground and how everything we were seeing today was rebuilt with government aid. These people were tough, and prosperous. In fact, the entire Rann of Kutch region appeared very prosperous to us. And thanks to Mr Modi, we had good roads all the way to the Pakistan border. 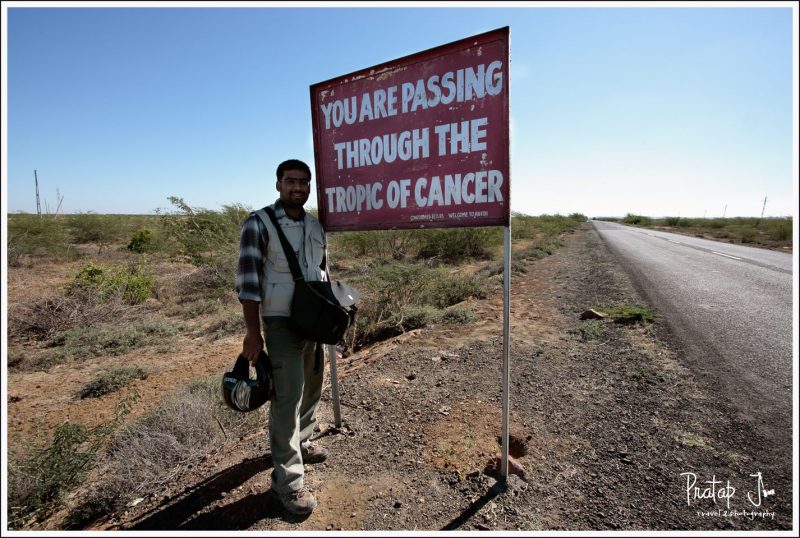 On the way to Kala Dunger

From the Crafts Village, we caught another bus and went to the next village – Ajhrakhpur. This was home to the famous block prints of a particular family who had been in the business for almost 9 generations now. Mr. Ismail Khatri, who belonged to this family, welcomed us into his house when we knocked on his doors. He showed us how the block prints were made, finished products ready to be sold/exported, and spoke to his about his PhD. Yes, the man had a PhD and several British and foreign people had worked under him to study his art. The warmth and genuineness in his approach was hard to miss. He didn’t compel us to buy anything. He showed us what he was born to do, and we satisfied our curiosity. Of course, for memories sake I did purchase a stole and some block prints which I treasure for the story behind it. Unfortunately it was dusk by then, and we had to return to Bhuj. So we big goodbye to our super friendly host and caught a bus back to our base.

Day two in Bhuj was again planned based on our hotel owner’s suggestion. We hired a two-wheeler (again from a rental suggested by him), and decided to drive as far as we could, till the border. Mr Gangaram told that the sunset from atop the Black Mountain was a photographer’s wet dream, so we set off with great expectation. However, there was one small detail, which Mr Gangaram didn’t mention. The ride till Kala Dunger, or Black Mountain, was thro barren dessert. Throughout the entire 70km journey till ou destination, we saw exactly a dozen vehicles, and passed by maybe three or four villages. I freaked out at the thought of riding back through the same terrain after sunset. What if we were to have a flat tire? Remember, it was December and the temperatures after sunset was bound to drop to single digit.

Sadly, I never finished this write up. So here are pictures from Mandvi and Kala Dunger 🙂