I used a technique called focus stacking to shoot this macro photo of a Crimson Passion Flower. I found this beautiful ornamental flower in the gardens of the guest house called Cassiopeia in the Niligiris. Focus stacking is a technique to increase the depth of field, while maintaining a low aperture. In this case, I shot at an aperture of f/10, and the stamen are all in focus. This is a blend of four photos. This photo was possible because of the ample time we had at the guest house. Focus stacking requires concentration, and the use of a sturdy tripod. We had the guest house to ourselves, so I had pretty much no distraction. Perhaps, the biggest challenge was the heavy wind. Because we overlap the individual photos during focus stacking, the photos must align as closely as possible. 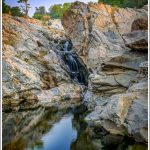 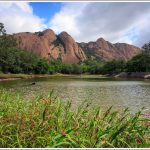