“Take a bus to Mettupalayam. After you get off, catch another bus to Kotagiri. There is one every half an hour and it is a 45 minute journey. At Kotagiri, wait for a local bus to Kodanad. Ask someone about the timings.” When Bhavan gave me these instructions on how to reach “Alpas Camps and Resorts” in Kodanad, I was not exactly sure if I wanted to undertake this journey. Bangalore had instilled a deep sense of distrust in public transport. Whether you are taking the airport shuttle or the premium Volvo city buses, you need a highly flexible schedule to trust public transport here.

But after spending a weekend in Kodanad, I learnt that things work quite differently in this small town. In fact, I could just say that things work. I eventually drove from Bangalore and was pleasantly surprised at how good the hill roads where. It wasn’t just good and smooth road surface that impressed me. The roads were well marked and had reflectors (cat eyes) where required. The local state transport buses ran on time and were reliable. The entire Nilgiris has been designated as a plastic free zone, and I was told that the enforcement was strict.

We drove via Mysore, Bandipur, Masinagudi and Ooty. This route sees very heavy traffic on weekends, and the last time I travelled to Kotagiri, we took 5 hours just to reach Mysore. This time, I was driving on a weekday and I had to actually slow down to enjoy the beautiful scenery around. The forest was at its greenest, and it was delightful to drive through the canopied route after Gundalpet. 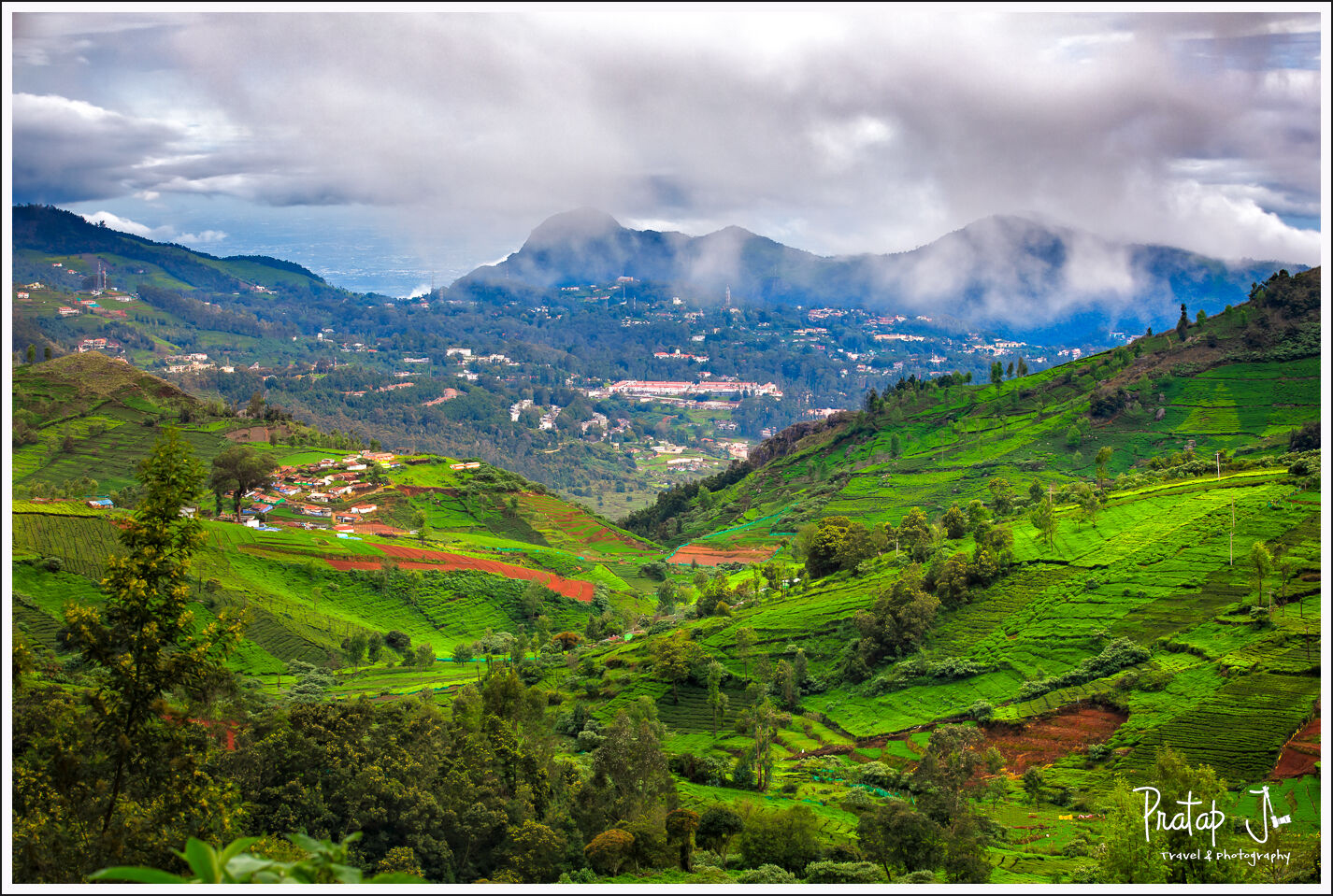 The lush green slopes of the Nilgiris with tea plantations

It was late at night when we reached Kodanad, and we had to trek the last 20 minutes in the dark. Bhavan was with us to show us the way, but even otherwise, Mr Ramesh, who takes care of Alpas, would have come to the main road to greet us. Thick fog surrounded the Discover Alpas Camps and Resorts when we got there. I could only catch glimpses of distant city lights and shapes of the mountainscape in front of me. But the cool forest breeze and lack of vehicular sounds were enough to make me feel home. 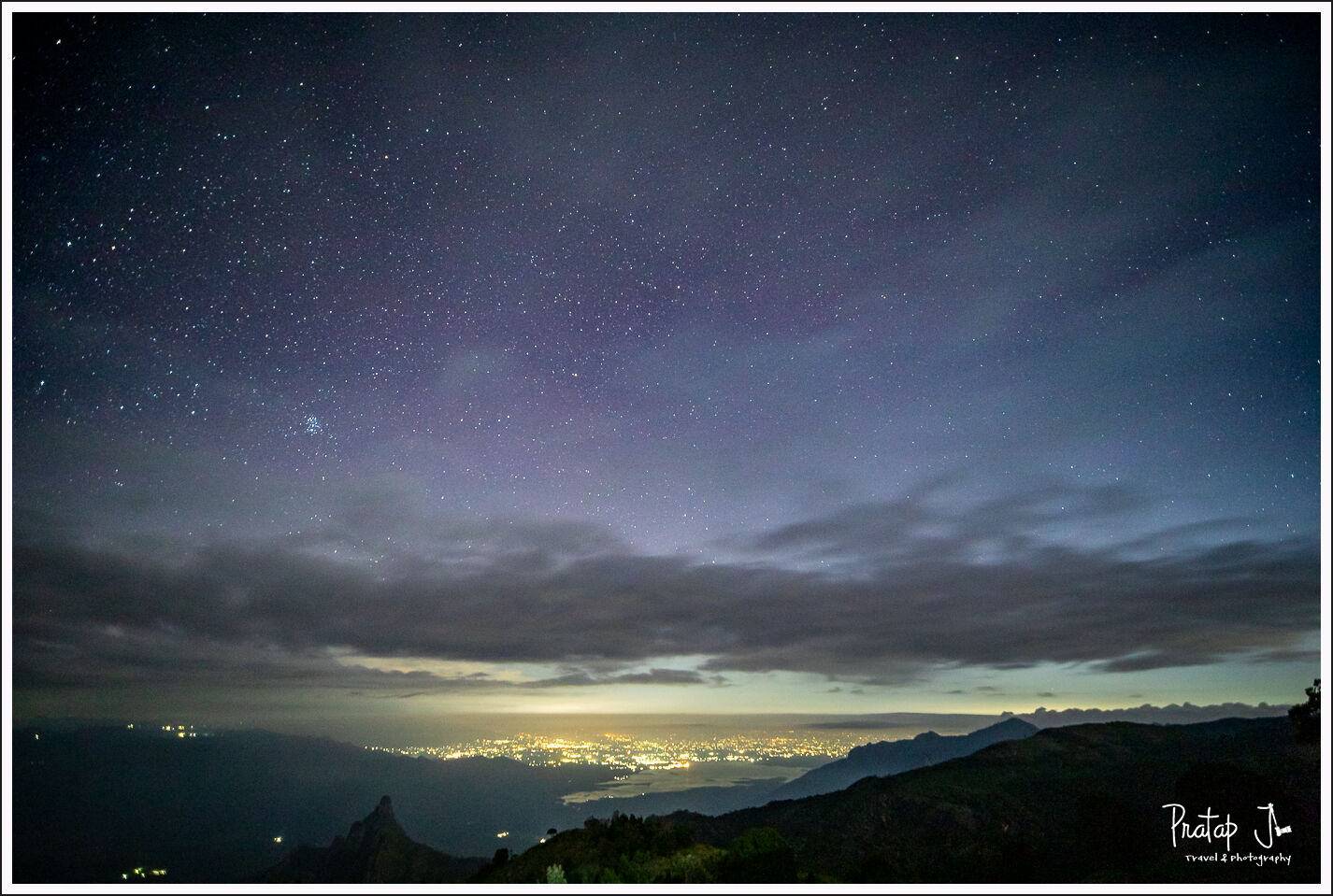 Among the many attractions in Kotagiri, a 1000 acre property which was once owned by Dr. Jayalalitha – the ex CM of Tamil Nadu, is ubiquitous in Kodanad. The other famous landmark is the Rangaswamy Peak and Pillar. From the Kodanad Viewpoint, it is a majestic sight, 1788 meters above sea level. And some of the most epic views of this mysterious rock formation is from Alpas, which is very close to the viewpoint. The huge backwaters of Bhawani Sagar dam beyond the mountain range, in the plains, compliments the view of Ramaswamy Peak perfectly. 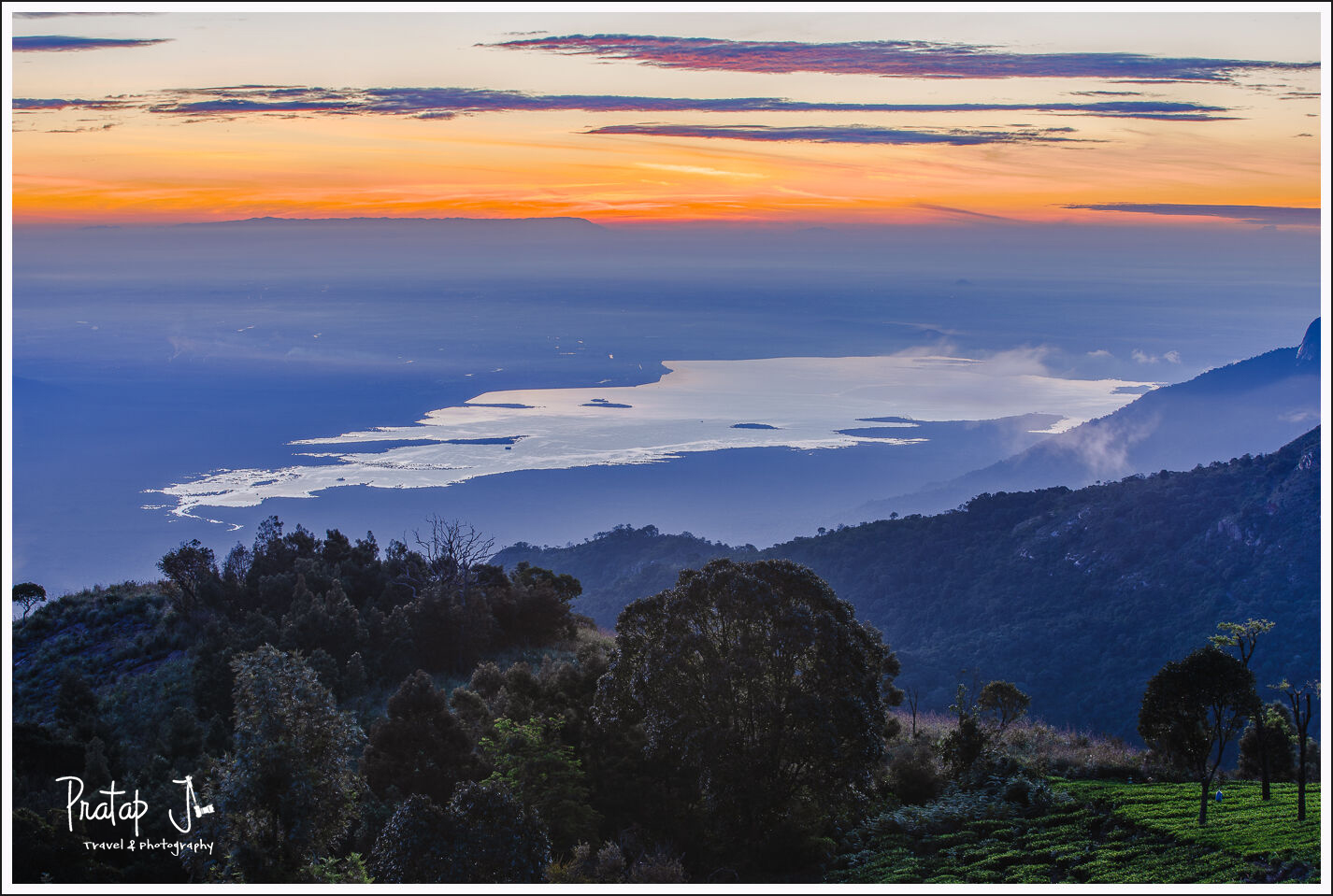 View of the Backwaters of the Bhawani Sagar Dam

The Nilgiris was once home to the Irula, Bagada and Kurumba tribes. A pagan shrine worshiped by these mountain people is on the way to Kodanad. It is easy to miss, so watch out for it. The Rangaswamy peak is also considered sacred by the tribes. At night, under the star-lit sky, one can lonely lights in the distant forest surrounding the peak. These are lights from temples deep in the forest. Mr Ramesh has a lot of interesting stories about the local folklore of the place. The people’s faith here is strong, and I think the mystical mountains are the reason. Even if you don’t care for these stories, you can’t help but wonder about the animals that roam just at the periphery of the resort. If you listen intently, you can hear the call of a sambhar deer. Or if you are lucky, you might spot a wild bear, elephant or some such large mammal.

The following morning, I saw one of the most epic views of my life. From my tent, where I slept at night, I could see the Rangaswamy peak first, then the tapering mountain range which led to the backwaters of the Bhawani Sagar dam, and finally an orange ball rising above the horizon. The light was magical – something I did not even witness in Iceland the previous month. Needless to say, I got busy shooting photos. 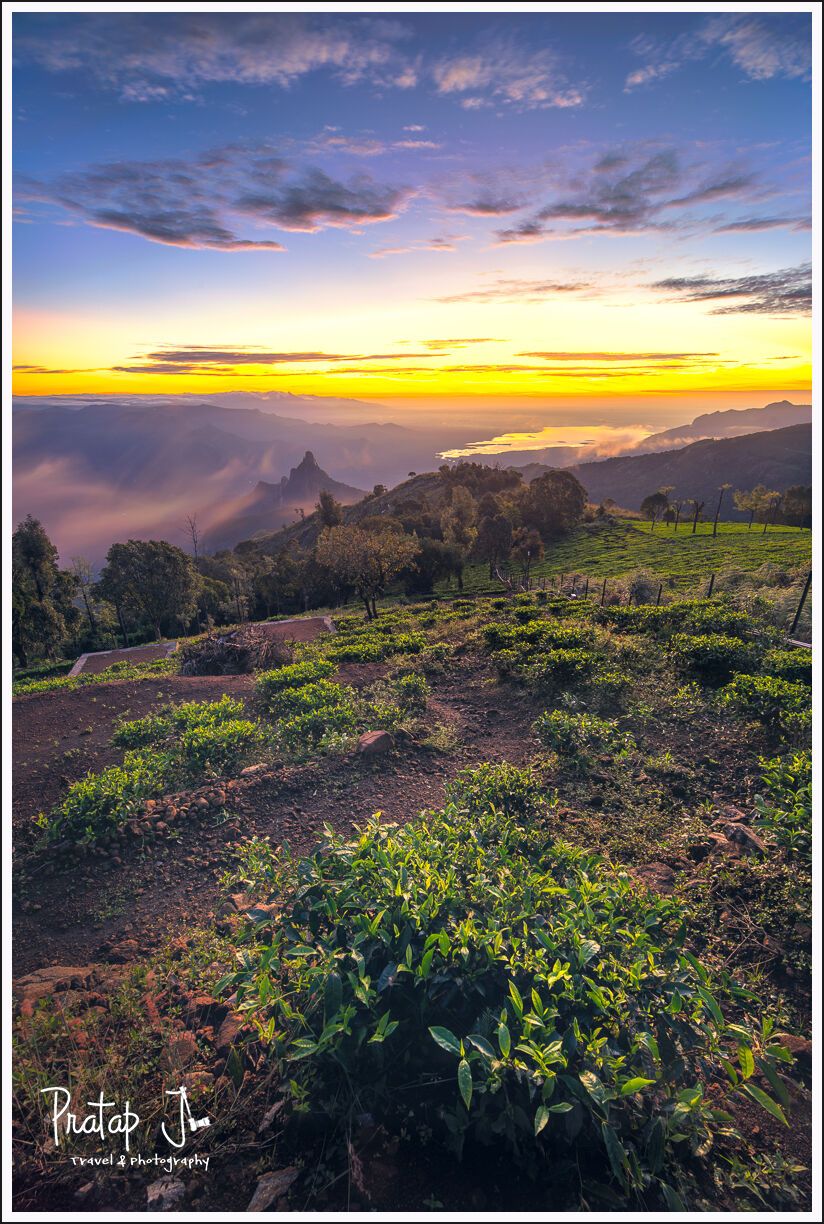 The good folk at Alpas arrange for a visit to a waterfall which can be reached after a jeep ride and a small hike. However, we could not go to the waterfall because the recent rainfall had restricted access. Instead, we chose to explore the Nilgiris with the help of Mr. Ramesh.

We packed lunch and drove to the edge of the mountain range – on a road which even Mr Ramesh had not been on. It was a beautiful drive. We went past small and big villages, bridges, streams, tea factories, and of course, tea plantations. The route that we took did not have a lot of traffic and was the perfect mountain drive. We even lunched by the roadside, beside a stream. 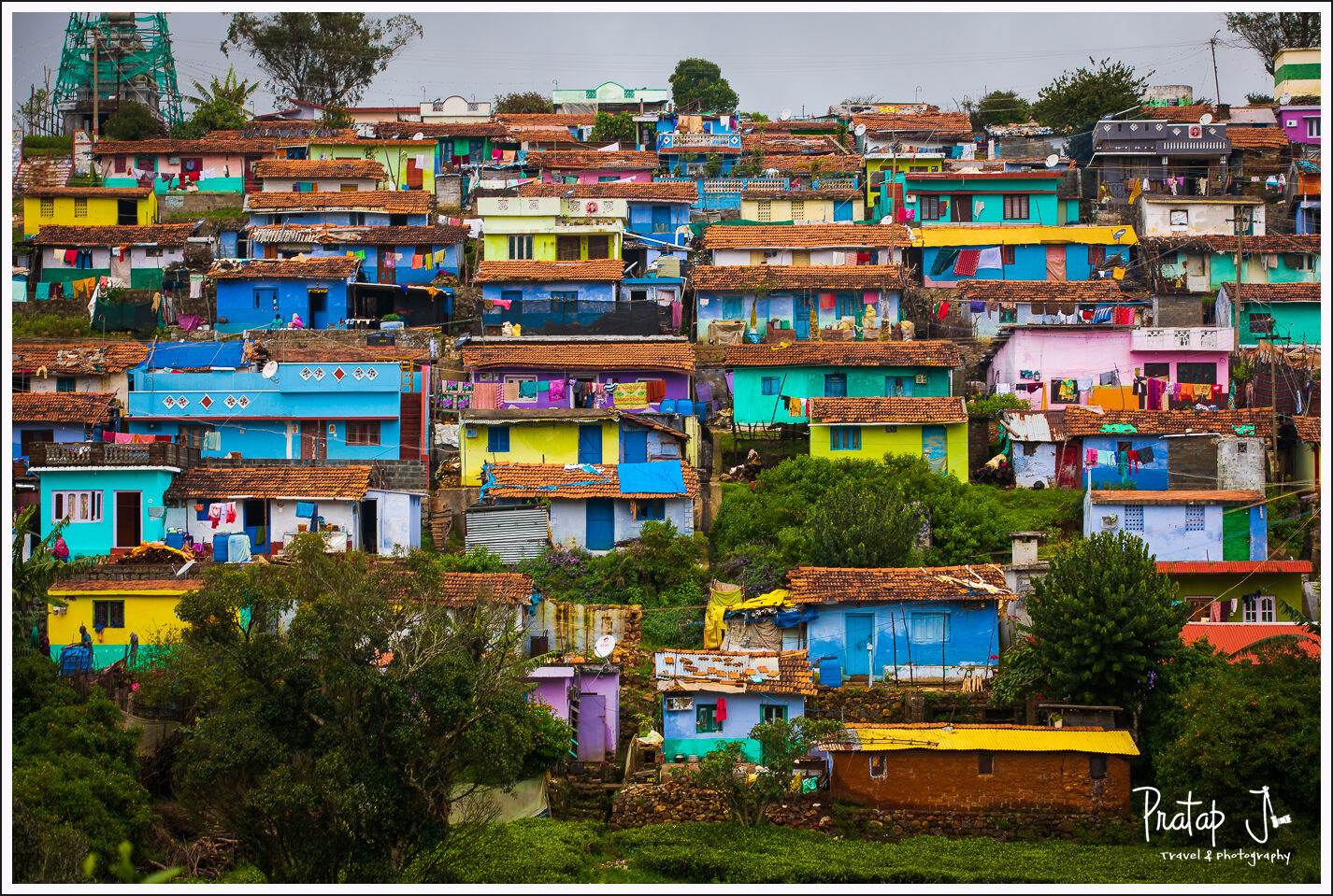 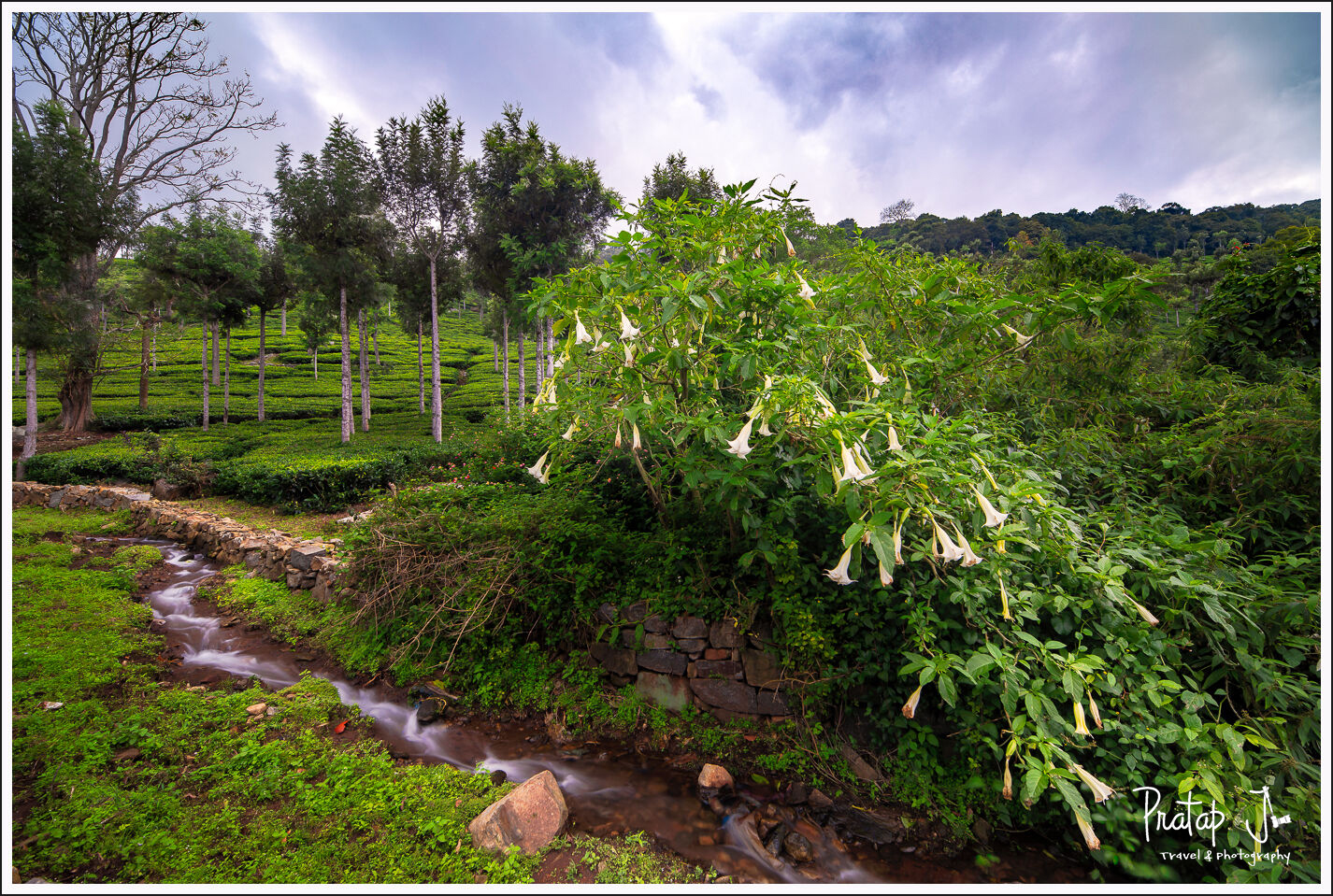 After several hours of driving, we came close to what was probably the last hamlet in the Nilgiris range in the Kilkotagiri area. We had a spectacular view of the backwaters from there. We had left the tea plantations behind and were looking at a mountain slope which actually had trees. This is how the Nilgiris would have looked like before tea cultivation began. When the light began to fade, we turned around and drove back to Kodanad. 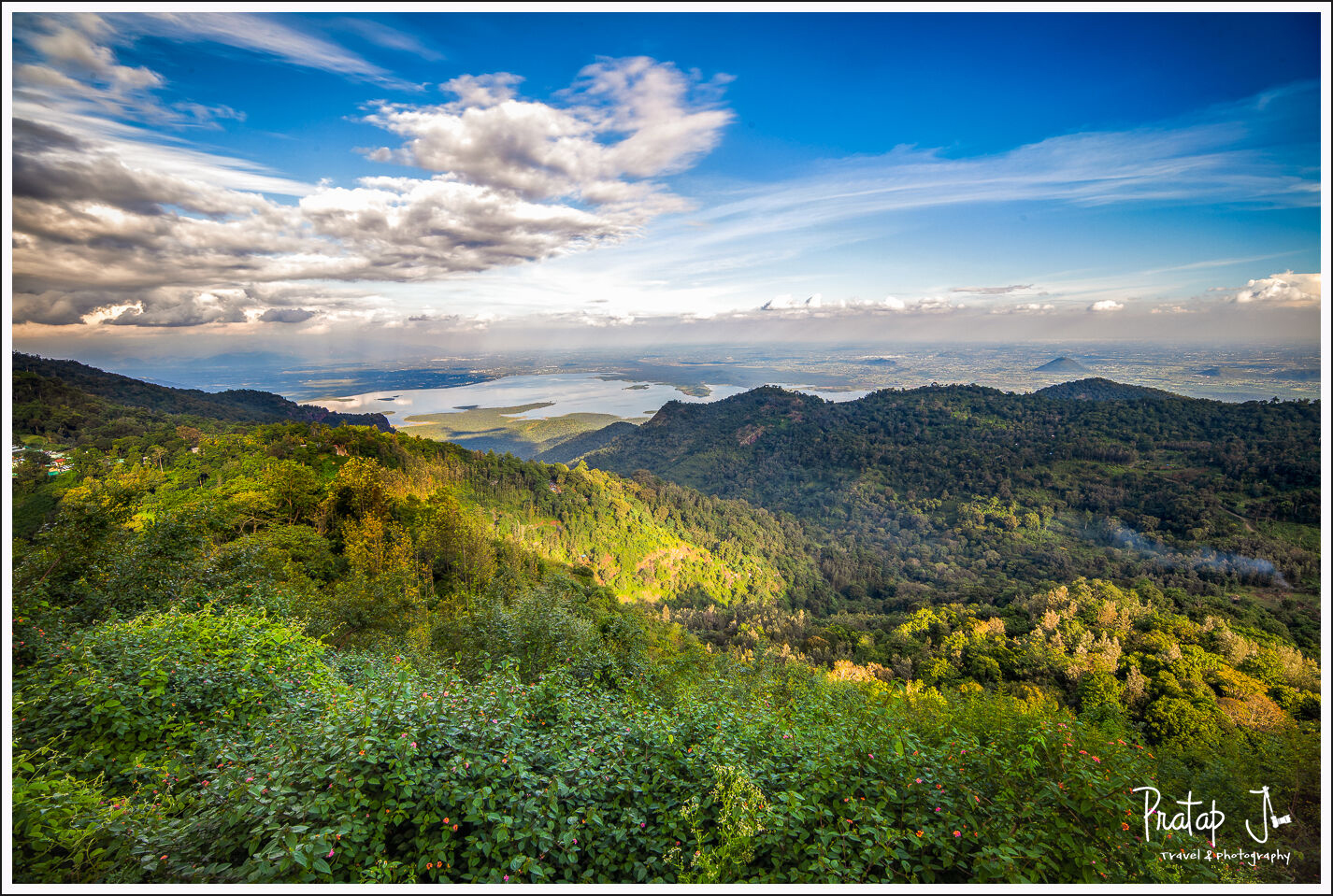 View of natural forest from Kilkotagiri

That night, the clouds cleared up and the sky was filled with stars. These are the sorts of moments I live for. We first stopped the car by the roadside and shot some milky way photos. Then, at the Alpas resort I set up a couple of timelapses. Bhavan had decided not to sleep that night and had his own timelapse and star trails running. The cocktail of clear skies, mountain silhouettes and cool air was great for some conversation. I don’t remember when I slept, but I do remember feeling immensely happy for experiencing nature’s beauty in a variety of forms. 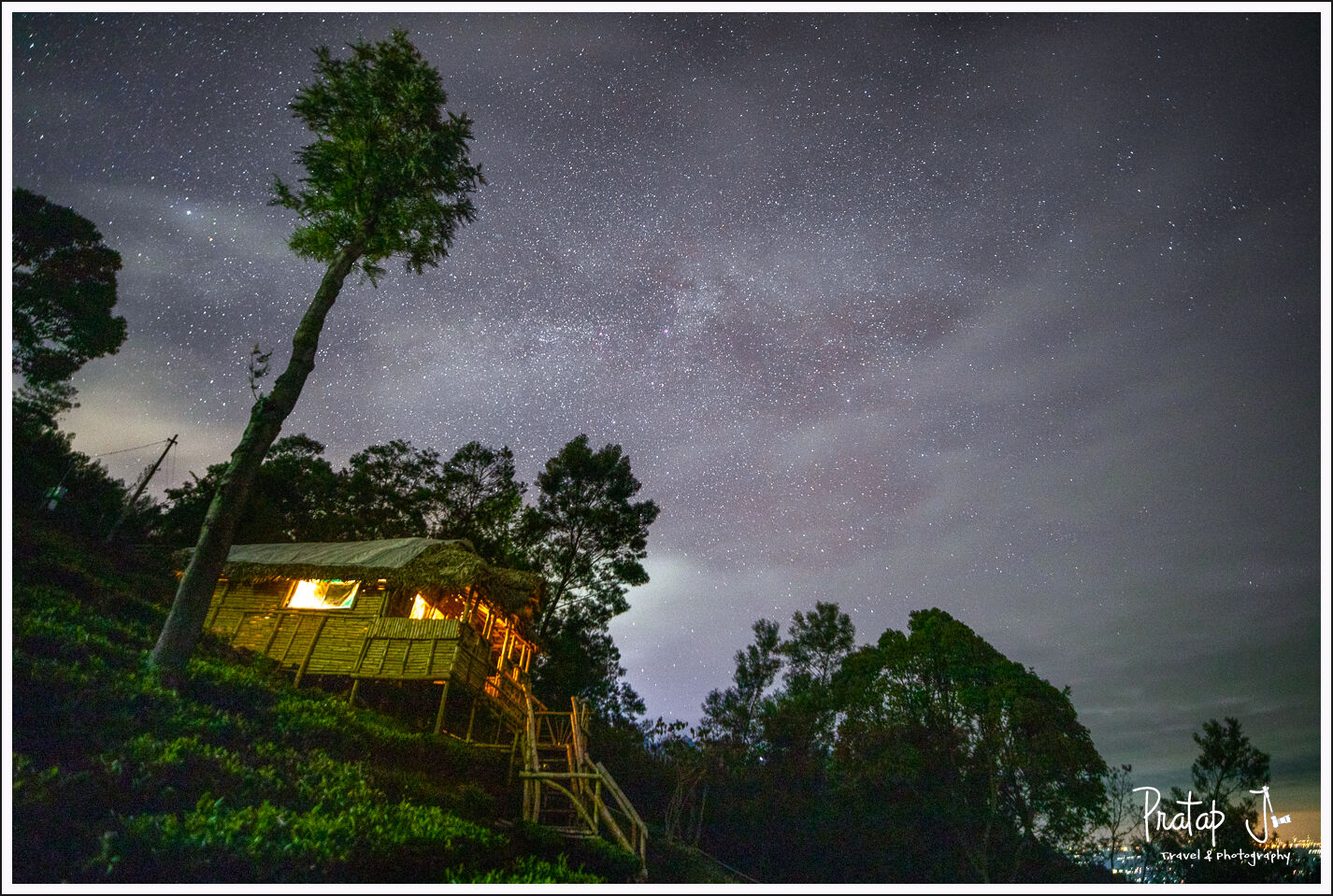 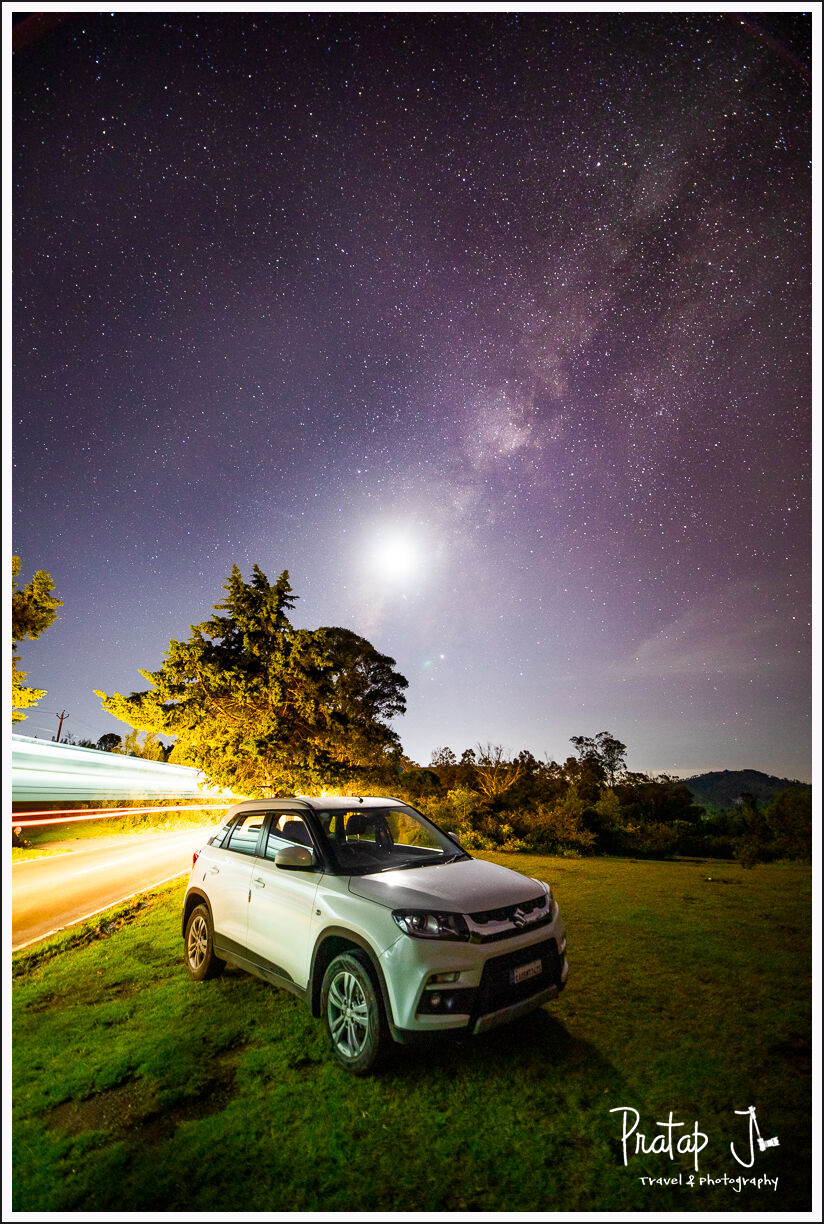 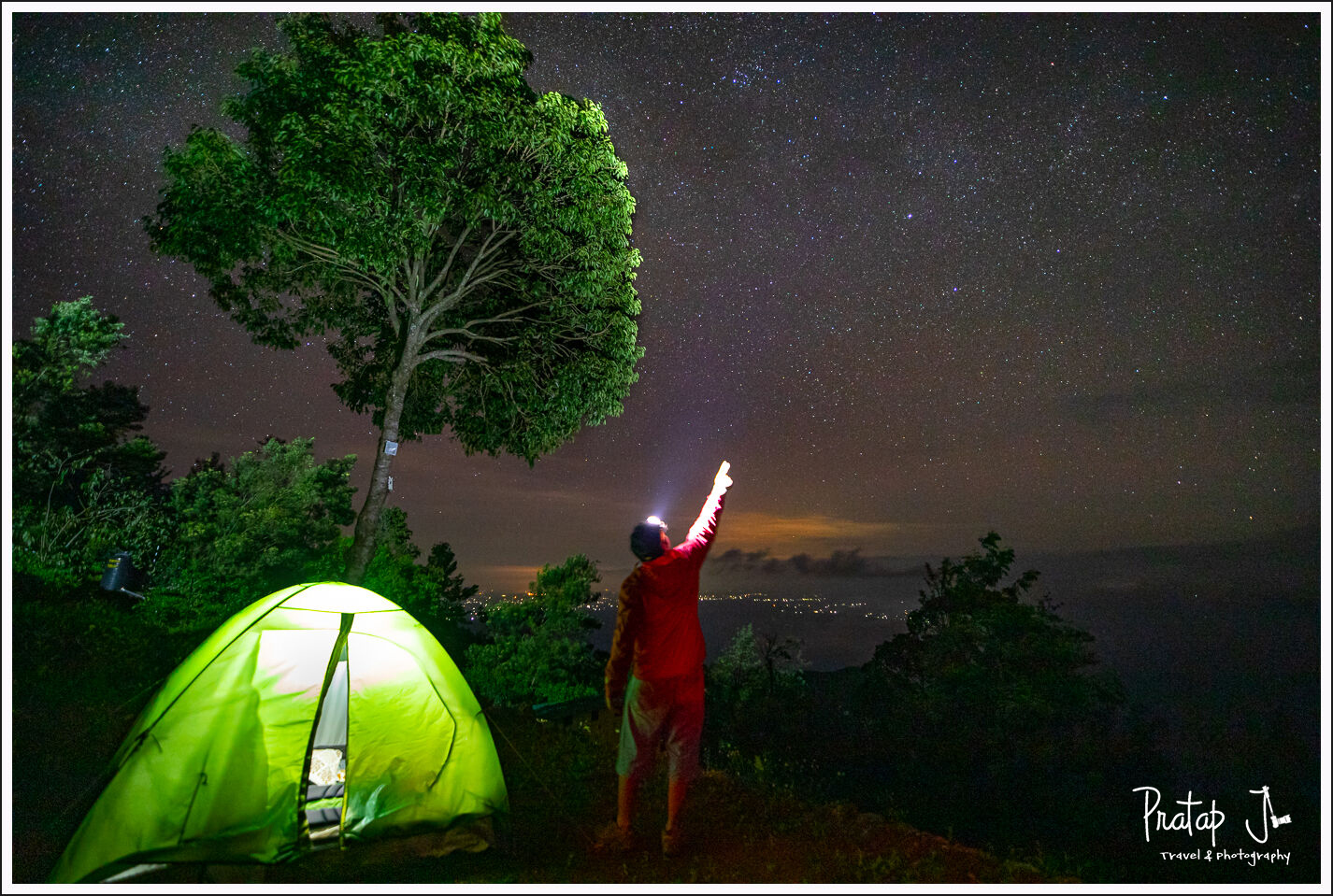 Camping under the stars at Alpas Resorts

We left Kodanad after spending two nights at Alpas. We decided to drive back via the Mettupalayam – Avanashi – Salem route. The roads were fantastic as usual but it did not feel the same as driving through the forest. Although my stay at Alpas was short, the place welcomes visitors for long term stay as well. With a very homely feel, and excellent vegetarian only food, don’t be surprised if you are reluctant to leave Alpas as per your schedule. A huge shout out to Bhavan for coordinating everything!